As reviewed by Alan Twigg in BC BOOKWORLD, Winter
1997:
“Letters from Cuba presents Cuba beyond the tourist enclaves.  ‘Cubans are the friendliest people I’ve ever encountered,’ the author writes.  ‘I had expected to find fiery-eyed revolutionaries quoting Marx and Engels on every street corner, or carrying machine guns and shouting Death to America.’
“Ostensibly a series of holiday letters sent to friends and family, Letters is an off-the-beaten travelogue that mixes history and cultural observations with informal encounters and humorous asides.  Adolf Hungry Wolf and his sons were warmly welcomed by rural Cubans who appreciated their fascination with antiquated machinery as well as their compatible attitudes towards community.
“Forsaking Havana’s nightlife in favor of railway outposts, Hungry Wolf gleaned a sympathetic view of the Cuban people?.”
The author met and spent time with ordinary Cubans-farmers, sugarmill workers, cowboys and steam railroaders-people whose thoughts and opinions have seldom been heard and whose photos are not often seen.

A classic volume about railroading in one of North America’s most scenic and rugged regions, along Canada’s west coast. This first fully-illustrated history of the Pacific Great Eastern Railway, later B C Rail, includes nearly 400 photographs and illustrations, including 64 pages in full colour, showing trains, stations, people and tracks that make up this fascinating railway. The informative text includes numerous entertaining first-hand accounts and anecdotes from old railroaders, plus maps and equipment rosters.
Said a review in the Canadian railway magazine ON TRACK: “This is both an entertaining and informative book that I personally delighted in reading, not once, but several times. Hungry Wolf’s own writing, as well as the many original stories by PGE vets, paints a vivid picture of the birth and growth of this railway. Speaking of pictures, this volume is simply loaded with them. They are much too beautiful to describe and must be seen to be appreciated.
These are not just my opinions, but are expressed by everyone I know to have read this book.” 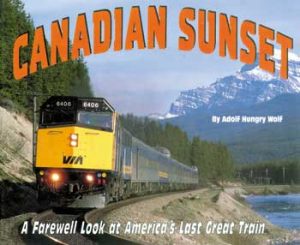 “The Canadian”-the name conjures up romantic notions of elegant travel and dining aboard silver cars as they pass through lush forests and magnificent mountains, past sapphire lakes under azure skies.
From 1955 to 1989, this world-renowned train traversed Canada across nearly 3,000 miles of lakes, prairie, and mountains, from Montreal, Quebec to Vancouver, British Columbia.
The author provides engaging details of the journey, one he made himself on numerous occasions.  In his narrative, we experience many of the fascinating people and places along the way.
In this beautiful compilation of 142 colour photographs, Adolf and son Okan Hungry Wolf, along with a dozen of the continent’s best photographers, have captured the train in the dazzling imagery of all four season-through bright sunshine, rainstorms and blizzards, and the depths of night.  The train’s first regal paint scheme of maroon and gray gave way to ‘action red’ and white, and was finally transformed into the blue and yellow of VIA Rail Canada, prior to ‘the end.’
This is a fitting reminiscence, farewell-and tribute-to North America’s last great train.
ISBN 0-87046-107-9
112 pages, 10 1/4 X 8 1/2, full colour, clothbound.
10 years out of print-final copies (less than 50 remain):  $85 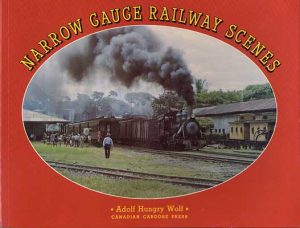 Over 400 fascinating photo views of narrow gauge railroading from Canada and the United States down to Mexico and Guatemala.  Many vignettes of famous lines such as the Denver & Rio Grande, Kaslo & Slocan, East Broad Top, Rio Grande Southern, Sumpter Valley, the West Side Lumber Company, even Ward Kimball’s movie-famous Grizzly Flats.  Featuring the work of many well-known photographers over the past one hundred years, along with maps, and artwork by     locomotive engineer John Coker. 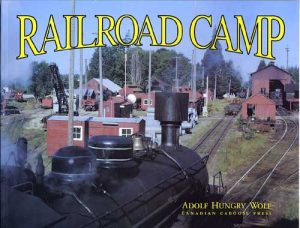 Memorialized by a famous Kinsey photograph, Railroad Camp was the last big stage for a steam-powered logging show in North America.  Rayonier Incorporated’s Railroad Camp saw everything from little diamond-stacked wood-burners to geared Shays and huge Mallet locomotives, ending with yellow and green diesels in the 1970’s.  Its   cluster of unique and antique shops and numerous other museum-worthy   buildings lasted right to the end, but were then torn down.  This book shows them all, inside and out.  “A place where boys grew up around the trains they later worked on.”  140 rare photos    document a way of life in the woods that will never be seen again.

OFF ON A WILD CABOOSE CHASE
True adventures, folklore, and a farewell tribute to the old train caboose
By a writer who lived aboard one 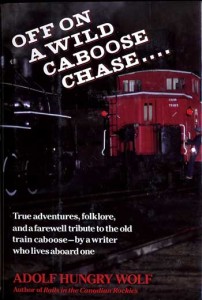 From PUBLISHER’S WEEKLY:
“This delightfully disorganized romp through the world of railroads and railroad lore will appeal to dedicated rail fans and casual readers alike?.a relaxing and enjoyable reading experience.”
From the “Sacramento Bee”:
“Hungry Wolf is a warmly natural storyteller, and his book isn’t just for old railroad hands; it’s for anybody who feels a little faster pulse when contemplating the joyous mixtures of play and reality that we so seldom have the heart to explore.”
ISBN 0-688-07752-8
206 pages, 5 1/2 X 8 1/2, clothbound, with photos and colour cover, $24.95.