POW-WOW-Dancer’s and Craftworker’s Handbook.
With Drawings by Okan Hungry Wolf, plus numerous    photographs. 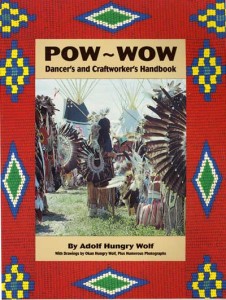 North American tribes from coast to coast are celebrating their native heritage with frequent pow-wows, where the people gather for camping, singing, feasting and dancing.  Crows come from near and far, often from around the world, some wearing family heirloom costumes, while others dress in the latest native and non-native fashions.
This book is filled with photographs showing pow-wows and dance             costumes over the past 100 years, accompanied by written histories and first-hand accounts.  Numerous pen and ink drawings illustrate many of the items worn with pow-wow costumes, including information on how they are made.  Dancers, craftworkers and historians will study these pages with a magnifying glass to learn more details about the American continent’s pow-wow life. 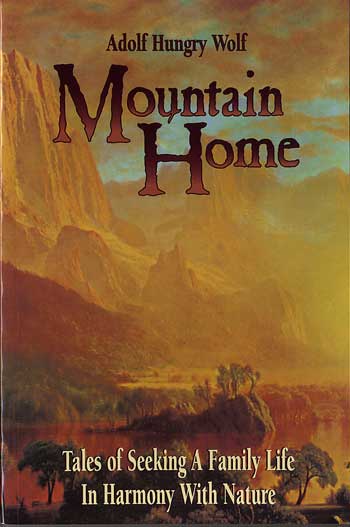 This was Adolf Hungry Wolf’s 50th book,   written in his 50th year,   celebrating 25 years since he first published GOOD MEDICINE-Life in Harmony with Nature, which has sold over 100,000 copies in several languages and editions.  Widely reviewed, that homespun primer of native and outdoor spiritual philosophy touched the lives of many readers in positive ways, providing sort of a “Wish List” for those seeking a back-to-the-land kind of life.
After 25 years of experience in actually trying to live a more nature-friendly life, the author recounted the highlights and disappointments with a series of fireside tales about wild animals, family pets, simple housing, natural foods-and the daily challenges of raising and home schooling four children in a wilderness setting without phone, TV, electricity or running water.

INDIAN TRIBES of the
NORTHERN ROCKIES

The main    purpose of this book is to present           a volume of cultural information and historical facts about several neighboring tribes living in and around the Rocky Mountains of British Columbia, Alberta and Montana. It is especially intended as a handy reference for younger members of those tribes, who see a lot of educational material about the rest of the world, but not so much about their own. This   illustrated   handbook with photographs, maps, charts and historical data, includes the following groups: Blackfoot Confederacy, (Kainah, Pikunni, Siksika), Sarcee, Stoney, Kootenay Flathead-Salish plus Treaties.
ISBN 0-920698-11-5
135 pages, 5 1/2 X 8 1/2, softbound, many photos, $11.95 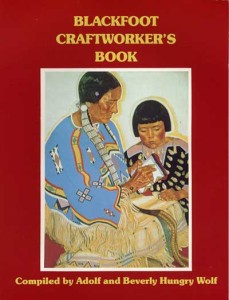 The main purpose of this book is to encourage craftworkers among the four      divisions of the Blackfoot Nation to learn the traditional styles of their own People’s culture. The articles illustrated in here are in the collections of various museums throughout North America. Most of them are not readily accessible to Blackfoot craftworkers. Many of them are stored in dark rooms,            surrounded by the smell of mothballs. Museums have only limited display space, and generally select only the finest articles to keep out. This book, then, is your own personal version of a museum display on the Blackfoot   material culture.
ISBN 0-913990-80-9
80 pages, 8 1/2 X 11, softbound, many photos and illustrations, $11.95 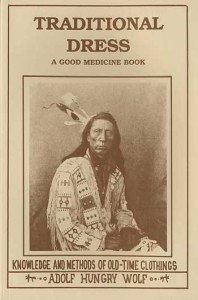 Take a fascinating look at the clothing styles of 19th and early 20th century Native Americans and learn what influenced their dress-environment, cultural tradition, status, and perhaps most intriguing, dreams and visions.

Most of the items described here are accompanied by illustrated instructions for recreating authentic apparel at home.

CHILDREN OF THE CIRCLE
A photographic history of Native American children from the late 1800’s to 1920.
By Adolf and Star Hungry Wolf 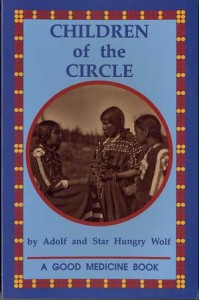 With rare and beautiful photographs of Native American children, accompanied by informative and entertaining essays.  A tribute to childhood in many tribes.
“A book that evokes many different emotions.” The Cherokee Heritage Center
ISBN 0-920698-39-5
160 pages, 5 1/2 X 8 1/2, softcover, $12.95.

LEGENDS
Told by the Old People of many Tribes
Revised Edition 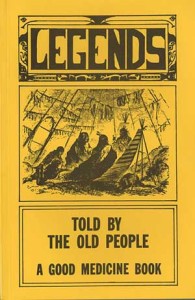 In the Old Days the often-long Season of Winter was a time spent mostly indoors around a central fireplace, whether the home was a tipi, an Earth lodge, a Brush lodge, or an Igloo.  The men were often gone hunting, raiding, or taking care of the Horses.  The women were kept busy cooking, sewing, and hauling wood and water.  So, it was often left for the Old People in the home-grandfather or an old aunt-to watch the children and entertain them.  They played games, learned songs, and practiced skills that the parents were busy doing.  But, as with children everywhere, the favorite pastime was listening to the Old Ones’ stories-real or imaginary.
This expanded edition, with new illustrations and stories, is a unique and authentic view of the world as revealed through these tales collected from Indigenous people across North America.